“I knew that when I began college, my parents would not be able to contribute to my education financially,” Furlan said. “I remember the tears in my mother’s eyes when she told me that my grades would probably be the only thing to help me pay for college.”

After transferring from a two-year college where she struggled to balance her studies on top of working, Furlan was able to secure $2,848 in MAP grant funding to attend Roosevelt University, where she can now focus more on school and less on finances.

Furlan is not the only Illinois student who relies on MAP and certainly won’t be the last.

As the end of the 102nd Illinois General Assembly Legislative Session approaches, PCC held its annual Higher Education Advocacy Day in partnership with Young Invincibles on March 9. Throughout the day, we joined together with higher education advocates, students, elected officials, and other leaders from around the state to urge the Illinois Legislature to pass the Governor’s proposed $122 million increase in MAP grant funding into the state budget for FY23.

The day began with a presentation from our PCC Senior Policy Manager Emily Goldman who highlighted the policy work that the organization is doing to help make college more accessible and equitable for every student in Illinois.

“Illinois has an opportunity to get back on track and advance equity in higher education to that end,” Goldman said, speaking of the proposed increase in MAP Funding. “This investment would put Illinois back on track towards making college more affordable for all MAP applicants.”

“Higher Ed is how we grow. It’s how we grow as individuals, but it’s also how we grow collectively. It’s where innovation comes from and how we move forward and progress,” said Representative Stuart, adding that the $122 million MAP Grant funding should not be viewed as an increase in spending, but rather as an investment in the future of Illinois and its people.

Echoing Representative Stuart, Senator Pacione-Zayas said it is important to “upset the set up” when it comes to higher education funding. She explained that by investing in students of color and those from low-income backgrounds, Illinois’ future will be stronger overall. “To deliver on the promise of higher education, we need to ensure affordability,” Pacione-Zayas said.

Pacione-Zayas also urged investment into the Minority Teachers of Illinois Scholarship to help better support and attract people of color to the teaching profession at all levels of education.

Following the event’s morning rally, advocates met with state legislators to speak to the needs of college students and how MAP grants and other equity-centered policies will help them complete their degree program.

Hearing from students across campuses in Chicago during Advocacy Day also helped put the need for equitable policies and further investment in MAP into perspective.

Eivan Herrera-Valdez, a junior at Northwestern University and member of PCC’s Student Advisory Council, shared his struggle with mental health while trying to find his place on campus. Similar to Herrera-Valdez, many students struggle with mental health, which is why PCC joined other advocates on Advocacy Day in also urging for a $19 million investment in the Mental Health Early Action on Campus Act.

Herrera-Valdez said that he began to feel more comfortable at Northwestern once he “found his tribe” and formed friendships with other students from similar backgrounds, ideas, and life experiences.

“My experience shows just how important it is to feel seen and validated in environments of higher learning. Before finding people that were similar to me both in lived experiences but also in values and ideas, my mental health was very poor,” Herrera-Valdez said. “…but after finding my tribe, my days became happier and my disposition became sunnier.”

Similar to Furlan, Herrera-Valdez says that the MAP grant and other funding have been crucial in allowing him to pursue his degree at Northwestern.

“As a MAP grant recipient, I am one of hundreds of thousands whose burden of college tuition is lessened because of the grant,” Herrera-Valdez said. “The mental toll that tuition and debt can have on a person is incalculable and so I feel extremely grateful towards government assistance such as MAP for relieving me of that stress.”

As we approach the end of session, we must remember the students who rely on MAP Grant funding across our state as we seek to pass this investment in higher education and the future of Illinois.

As Furlan said, “it is often the difference between completing a degree or giving up on your education for many students, including myself.”

A full video of the rally can be found here. 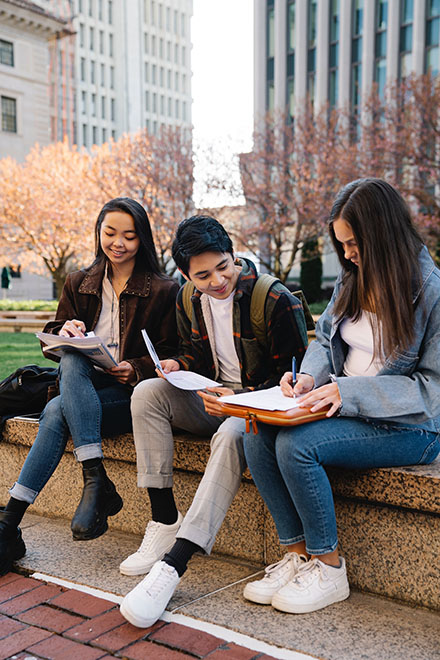 There are a number of actions you can take ahead of the end of the Spring Session. Please take a few minutes to share these messages on Twitter and other platforms with your elected officials:

To invest in the future of Illinois, we must pass @GovPritzker’s proposed $122M increase in MAP Funding to ensure more opportunities in #highered for students from all backgrounds. pic.twitter.com/dR5HGmcs1x

You can also email your state legislators and urge them to vote for the proposed $122 million investment in MAP grant funding.