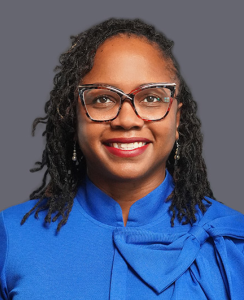 This year as we prepare for the fall, we also brace ourselves for change at every level of state and local government. The November gubernatorial and state house elections may change the faces of some of our state’s leaders, but PCC’s commitment to bold policy action driven by data and research and centering the stories and needs of Illinois students will not change.

As the general election approaches with voters given the chance to decide Illinois’ next governor and elected officials in State and House races, the Partnership for College Completion joins other champions for greater affordability, equity, and accountability in higher education in continuing to advocate for policies that center the needs of students and support more Illinoisans—particularly those historically underserved in higher education—in accessing, persisting and completing their degree.

When it comes to higher education funding, the election is November is pivotal. Prior to the General Assembly passing a historic higher education budget of $2.24 billion for the current fiscal year— a $248.5 million increase from FY22, Illinois had, over two decades, experienced significant disinvestment in higher education.

Funding Illinois’ Higher Education: How We Got Here

Previously, Illinois had an unwritten budget rule wherein the state allocated $1 to higher education for every $2 it allocated to the K-12 system. Still former Gov. Rod Blagojevich (D) firmly believed universities were too top-heavy with administration, pushing for reduced state funding to public institutions and a tuition freeze, both of which kick-started declining investment in Illinois’ higher education system. The decline continued under former Gov. Pat Quinn (D), and only intensified under former Gov. Bruce Rauner (R) during the prolonged budget impasse. Among those impacted by the stalemate in which, Chicago State University—a predominantly black institution—laid off 1/3 of its workforce and faced the possibility of closure.

Last session, the state legislature made its priorities clear by passing the historic $122 M increase in MAP and putting a stronger investment into our state’s public universities and colleges. While the future of higher education funding lies in the hands of our elected officials, advocates play a critical role in collectively advocating for policies that foster an environment where every Illinois student with college aspirations has what they need to persist toward earning a college degree. Regardless of the election outcomes this November, the Partnership will never stop working alongside other advocates in this space to fight for more equitable, accessible, and affordable higher education for all Illinoisans.

At the end of August, the Biden Administration released a student loan forgiveness plan that will bring relief to up to 43 million borrowers. The plan forgives up to $20,000 of debt for Pell Grant recipients, and up to $10,000 of debt for borrowers with incomes below $125,000. With these income provisions, the Department of Education anticipates that 90% of benefits included in the plan will go to individuals with incomes below $75,000. Additionally, the plan includes a new, income-based repayment plan that caps monthly repayment costs at 5% of discretionary income rather than 10%. Other provisions include raising the threshold for discretionary income protected from repayment, and forgiving loan balances after 10 years of repayment rather than 20 years. PCC joins borrowers in celebrating Biden’s debt forgiveness plan, however, we also recognize that without substantial changes to college affordability, student debt is projected to return to current levels by 2028.

The theme for this year’s ILEA Summit is “Reconnecting the ILEA Community on the Journey to HE Equity in IL.” The Summit is designed  to be both in-person where ILEA Core teams and leaders at the College of DuPage in Glen Ellyn on Wednesday, November 2, 2002 and virtual, with a half-day of programming targeted primarily for faculty on Friday, November 4, 2022.  Wednesday highlights will feature a keynote address from Dr.  DeRionne Pollard, President of Nevada State College, State of ILEA Address and Equity Speaks sessions led by ILEA institutions. Friday highlights include a keynote address and faculty workshop led by Dr. Judy Marquez Kiyama, Associate Vice Provost, Faculty Development, of The University of Arizona.

The Partnership is pleased to celebrate the accomplishments of its Illinois Equity in Attainment initiative partners and leaders as they persist in ongoing work to advance equitable outcomes in access and success on their campuses.

In collaboration with a team of faculty across the state, PCC and ICCB will release a DERA Corequisite Toolkit later this fall. PCC will also host a webinar to release the toolkit to educators across Illinois who are seeking to grow their capacity in reforming developmental education at their institutions. Additionally, PCC contracted with a research team from Johns Hopkins Universities to analyze and examine DERA strategic plans from all 48 Illinois community colleges and 8 four-year public institutions. This comprehensive report is scheduled for public release by the end of this calendar year.

Lifelong Illinois resident and a graduate of the University of Illinois Urbana-Champaign, Senator Sally J. Turner began her public service career in 1994, when she was elected as Logan County Clerk and Recorder followed by five more consecutive re-elections. In her role as Senator, she serves on a number of committees including for Higher Education.

Learn more about State Senator Turner and her priorities when it comes to higher education. 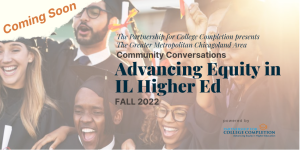 The Partnership for College Completion invites you to attend the Greater Chicagoland Community Conversations, which will bring people together to learn about how Illinois’ current approach to funding public universities affects everyone, and gives attendees resources to take action by becoming part of a vibrant and active community of advocates.

This event will engage a geographically diverse group of influential and impacted students, organizations, leaders and communities on issues related to higher education funding equity.

New to this newsletter? Stay up to date with our policy news and invite your colleagues to subscribe here!