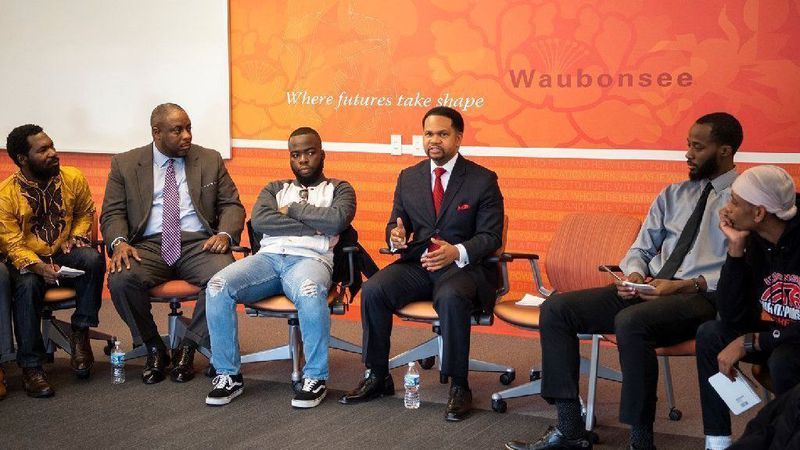 Officials at Waubonsee Community College had noticed it for a while.

Across the country, Africa-American males graduate at a substantially lower rate than their peers. Among the 10,000 students at WCC, there are 700 African-Americans enrolled, with just 250 of them being male, who have a 58 percent retention rate, compared to 70 percent for all students.

It’s an issue that had been noticed and discussed by the higher-ups at the school.

But that concern did not turn into an initiative until WCC President Christine Sobek and Vice President of Strategic Development Jamal Scott attended a Vermont meeting in the fall of 2017 with a national education group called the Association for Innovation and Transformation. There, according to Scott, college officials were challenged to pick a project that could be “transformative in nature” at each of their schools.

Projects eventually chosen by other colleges included focusing on adult students returning to the classroom; finding better ways to work with parents; promoting wellness; and increasing the number of programs offered.

But the moment the challenge went out, recalled Scott, “Dr. Sobek and I looked at each other and the light bulb went on.”

Because Scott’s role includes reviewing student data and success rates, “we knew this would be a great project for us to focus on.”

Since then, that’s just what they have done.

The first part of this initiative, Scott said, is to “find and foster mentorships in and around the community.” Which, he added, “would seem like such a natural” since Aurora’s first African-American mayor, elected the same year this initiative was seeded, grew up in the projects on Aurora’s East Side and faced many of the same challenges young black males face today.

And so, in December the mayor and other successful African-American men — including those in their 20s — met with a couple dozen black male students at WCC to discuss what it takes to overcome hurdles like poverty, racial stereotypes and low expectations too often placed on these young men.

By all accounts, it was a revealing and at times emotional meeting, where stories were shared, tears were shed, bridges were built and more eyes were opened to what is needed for these students to achieve success.

Some of the topics discussed: showing respect for others, including women and authority figures; learning to ask for help when needed; and breaking down stereotypes.

“Don’t let people define what you can be,” Irvin said, after telling the young men how a guidance counselor at East Aurora High School once informed him he’d never amount to much.

“When you see someone as successful as Mayor Irvin stand up and say, ‘I was where you are now,'” said Scott, “it makes a tremendous impact.”

These meetings are ongoing, he added, with the idea of finding mentors to pair with black male students looking for guidance.

The second part of the initiative, according to Scott, is an alignment with Chicago-based Partnership for College Completion, which has begun an initiative called Illinois Equity in Attainment that focuses on helping students who enter college at a disadvantage because of lack of opportunities.

According to the group, in community colleges, on average only 21 percent of all first-time, full-time students graduate, and only 16 percent of low-income students will graduate.

The idea, said Scott, is “to help them get off the ground and on more equal footing.”

While the number of black males enrolled at WCC has remained fairly stable over the decade, Scott is determined to raise that percentage. And one way to do that is to “do a better job” of letting African-American males know about the college, he insisted, adding that too many may be aware of the downtown Aurora campus “but did not know the Sugar Grove campus even existed.”

Scott plans to work much closer with school officials, including superintendents and guidance counselors, to more effectively market the opportunities at the school, even if it means providing bus support so “we can get the high school students out to the campus to see what it is all about.”

Not only does he and other officials want to see the enrollment numbers go up, he noted, “we need to make sure they are prepared to be successful when they get here.”

Success, however, must be measured not just through recruitment but also retention and completion. In other words, “it’s not good if we can get them to enroll and then they drop out a week later,” Scott said. “We want to see them complete this program or transfer to a four-year school.”

Aurora Communications Director Clayton Muhammad, who is also founder of the successful Boys II Men mentoring program and served as emcee at the round-table at WCC, knows more than anyone how very real the student achievement gap is among black males, not just in our community but nationally. And he’s convinced education is not only “the great equalizer,” it’s critical that successful African-Americans get involved in helping guide these students.

This group plans to meet again the last week of the month. And Scott says he’s “really excited” about the initiative because “it’s like anything in life … once you identify what you want to focus on, you get serious” about improving it.

“We are making it a number one priority,” he said. “And by galvanizing the community behind it, this will pay great dividends in the future.”