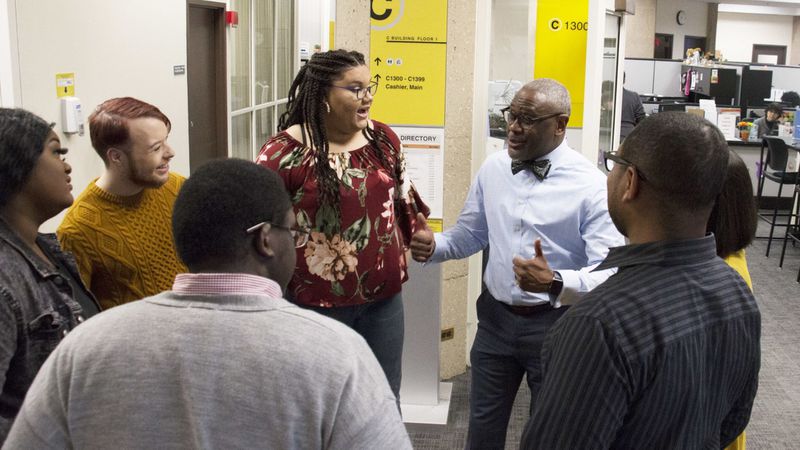 As a Brooklyn College student in the 1980s, concerns about racial unrest and inequities prompted Corey Williams, who is black, to join a fraternity that was predominantly white.

He said his goal was to help dismantle stereotypes and foster understanding at the New York City school.

Today, Williams said he is continuing a similar mission. Williams, who since developed mentoring programs targeting minority first-generation students at several colleges, was recently named the chief diversity officer at Governors State University in University Park, a first for the school.

“Rather than being on the sidelines viewing equity issues, we thought why not tackle equity issues within our own institution and be a model for other institutions across the state,” said Williams, 48, who also serves as GSU’s associate vice president for student affairs and dean of students.

He said he wants to decrease achievement gaps for first generation students of color, particularly black and Latino students at GSU, where among its 4,857 students 38.4 percent are African-American and 13 percent are Hispanic or Latino.

“We are working with a group of 25 colleges and universities across the state through a partnership, Illinois Equity in Attainment Initiative,” he said. “It is an initiative through the Partnership for College Completion. It is 25 colleges and universities across the state that have the focus of decreasing those achievement gaps over the next five years.”

Among the students targeted in the effort are African-Americans, Latinos, students receiving Pell grants, first-generation students and students with disabilities, he said.

Among factors contributing to achievement gaps are unique challenges some students face, he said.

It’s important to understand “that some of our students come from traumatic experiences and how trauma bleeds into their education,” he said. “By trauma, I mean (hunger), housing insecurities, dealing with violence at home, single-parent households, gang violence, those issues bleed into what tends to happen when they enter (college).”

He added first-generation students who make up roughly 42% of GSU undergraduates, also face unique challenges, including that they and their parents often don’t know how to navigate the higher education system and perform such tasks as completing financial aid applications and advocating for themselves.

“These are things we have to teach,” he said.

How should disparity issues be addressed?

“Having support systems in place to support students is absolutely key,” Williams said. “There are (federal) program grants for low-income, first-generation or students with disabilities to help. We are planning to submit for five grants through that process. I think each would bring in about $220,000 per year for five years.”

The grants would fund support mechanisms for the students, including increased advising, peer coaching and wrap-around services to aid in their college completion, Williams said.

“Each grant would support 100 to 150 students,” he added. “We would focus on students with disabilities, traditional students, veteran students, students looking to go into education and students pursuing STEM careers or the health career field.”

Williams said he also plans to conduct “a climate survey to get a sense of what’s going on at GSU, how students feel, how faculty and staff feel, perhaps having listening circles with them to find out issues that are very important to them that need to be addressed right away.”

Williams, who has a master’s degree in higher education from Chicago State University, has nearly two decades of experience working in leadership and administration in higher education positions, including at Triton College in River Grove, where he served as dean of student services and Title IX coordinator. There he founded and implemented Triton Men Pursuing Higher Education, a multifaceted mentoring program that aided in the recruitment, retention and graduation of minority males, he said.

“We worked with minority men, primarily African-American and Latino men,” he said. “We provided wrap-around services. Each male was paired with a mentor at the institution or an alumni. They would meet one to two times a month and collectively as a group once a week, and the young men served as mentors to middle and high school students to create a pipeline because for many of our first-generation students, particularly men of color, they lack that role model. So, it’s important for them to see people who look like them doing things they aspire to do.

“With the first . . . 25 students, all graduated in a two-year period,” he said, noting, “at some community colleges, the graduation rate for men of color is about 7 percent. The fact that we were able to do what we did was astounding. The model is being discussed at different conferences around the country.”

The program expanded to Elgin Community College and Waubonsee Community College in Sugar Grove, he said. He added at Triton, a similar women of color mentoring program also was developed, and he is looking to bring that to GSU.

Asked what lessons about diversity he wants GSU graduates to take with them into their careers and life, he replied, “GSU is reflective of our society, the makeup of the institution. It’s about respecting everyone’s beliefs, their background, their ideologies. That’s very important to me. It’s important for students as a whole to know how to navigate the nuances they’re going to face once they leave GSU.”

Communication is key to fostering a culture of respect and understanding, he said. Williams, who at age 9 emigrated from Panama to New York with his mother, has long held that belief.

That’s what prompted him to join Zeta Beta Tau, a predominantly Jewish and white fraternity while he attended Brooklyn College. His decision to do so followed the high-profile death in 1986 in New York of Michael Griffith, a 23-year-old New York City resident, who died after being struck by a car as he fled a mob of angry white teens. That experience and other racial tensions had a profound effect on Williams, who recalled racial tensions were high in the city and at the college.

“For me it was difficult to understand why something as simple as the color of a person’s skin would create barriers from getting people to truly know one another,” he said. “It was something I couldn’t get. As a child in central and south America, what I saw as an issue was more classism as opposed to racism, so this was very vexing to me, something I wanted to understand better, to create conversations to bring about understanding.”

“I learned a lot about the Jewish faith, and I was able to dismantle some preconceived notions that people may have had about black men,” he said.

In order to dismantle stereotypes and foster and maintain a culture of respect at GSU, it’s important to have “honest conversations, courageous conversations and safe conversations, to not hold things back but discuss things in a productive way, to create that safe space for people to seek understanding,” he said.