December 6, 2018, Chicago, IL — In a proposal unveiled on Tuesday as part of its FY2020 budget recommendations, the Illinois Board of Higher Education (IBHE) is requesting a $25 million taxpayer subsidy to private institutions. If enacted, these funds have the potential to be either a carve out for higher income students, or a tool for improving equity in Illinois higher education; it all depends on the implementation details.

The recommendation, titled “Financial Assistance for Nonpublic Institutions,” would revive a program that awarded $21 million to private institutions in FY2000, which itself was based on the rationale that Illinois should maintain a diversity of higher education institutions. How this act fits in with modern higher education goals of equity is left undetermined: “rules for the program would be developed to maximize current state goals,” the proposal reads.

In 2016, $136 million went toward making private universities more affordable for MAP students and yet a MAP grant only covers 14% of tuition at these colleges, less than half of the amount it covers at Illinois’ public universities. Sticker price aside, the average cost to low-income families is more than 30% greater at private institutions compared to at public universities. Further, these schools serve lower percentages of underrepresented and low-income students than public universities. So how can this $25 million be a force for equity, compared to better funding the MAP grants, a need-based program that goes directly to students, for example? 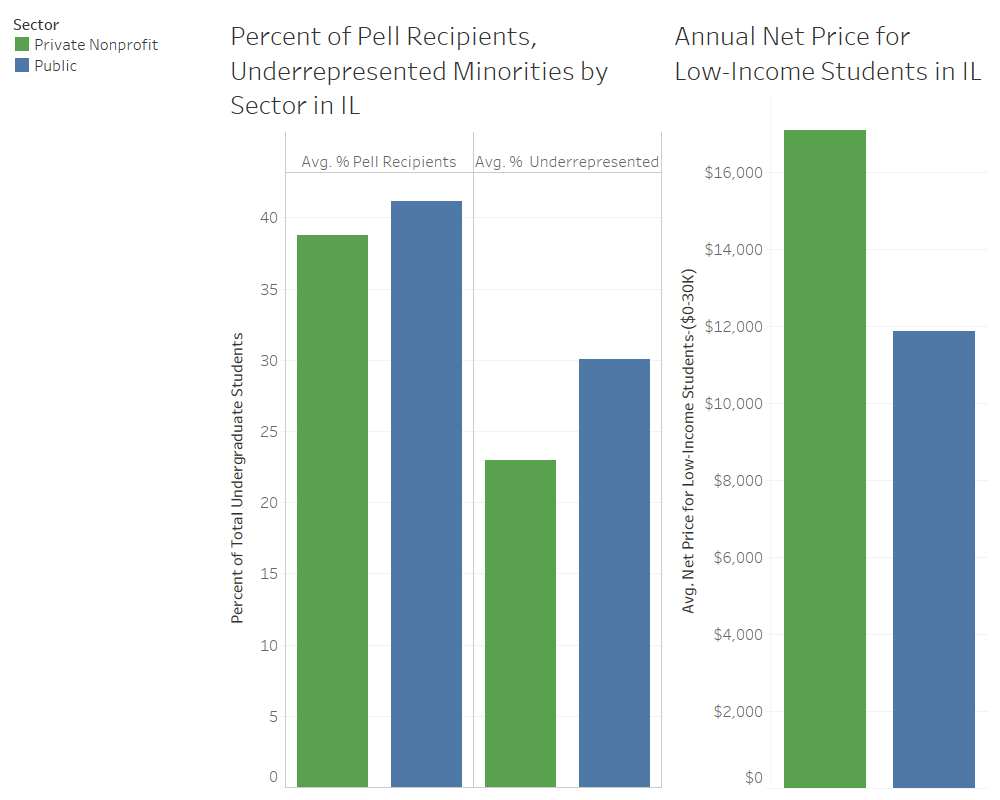 While private colleges do tend to have higher graduation rates for minority and low-income students, they also serve these populations more selectively. The Financial Assistance for Nonpublic Institutions program could counteract this selection and give more opportunities to underrepresented students by only distributing funds to colleges in proportion with their increases in number of underrepresented students served, and as matching grants that fund financial aid for those students. This would guarantee that taxpayer dollars are going toward increasing the rates at which better resourced private colleges serve the students who need it most, while simultaneously lowering the price of college for these students.

The original program was created in response to a 1961 statute calling for “maintain[ing] a diversity of public and private institutions.” PCC agrees that a healthy state higher education system should include a diverse tapestry of high-quality postsecondary options for all students, provided that these institutions serve students equitably. As proponents of the current iteration acknowledge, how it’s implemented is critical. Only a plan that allots funds as a condition of better serving underrepresented students, however, can turn this budget request into one that increases equity for Illinois’ students.

About:​​​​​​​​​​​​​ The Partnership for College Completion is a new nonprofit organization launched to catalyze and champion policies, systems and practices that ensure all students in and around Chicago – particularly low-income, first generation students – graduate from college and achieve their career aspirations. Launching this regional organization is the culmination of a two-year planning process that was led by Forefront’s College and Career Access, Persistence and Success (CCAPS) group and involved hundreds of stakeholders from across Chicago, the region and the nation. For more information: partnershipfcc.org